rent a house with swimming pool Baredine Cave is the first speleological object and a geomorphological natural preserve in Istria evaluated for tourist visitations.

The cave has been known and visited since times immemorial. The first documented explorations were conducted by speleologists from Trieste at the beginning of the 20th century when those explorers went as far as 80 m into its depth.

Explorations SD Proteus It was in the year 1973 that the members of Poreč’s Caving Club Proteus went to the lower part of the cave where they discovered a passage which made it possible for them to go as far as the underground lakes, i. e. to what is today considered to be the total depth of the cave. It was at their initiative that, in 1986, the Baredine Cave was, owing to its very special characteristics and exquisite beauty, proclaimed a monument of nature. 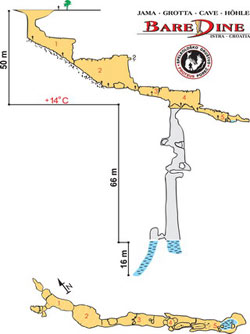 The first concrete efforts to adapt the cave started at the beginning of the 90’s. In May 1995 the cave was opened for tourist visits. In the following years the infrastructure was improved, which created conditions for a pleasant stay in and around the cave.Since the first proper explorations in the Baredine cave in 1973 until today there have been additional explorations with the aim of finding new, unexplored spaces. Surface pottery has been collected in soil sediments bearing witness to the fact that human beings entered the cave in ancient times and used to live there. Subterranean fauna has also been explored and studied.

The Baredine cave got its name from the expression for the nearby terrain (baredine), which probably comes from the word bared, used in the local dialect to denote untreated land. The Baredine Cave is situtated in the western part of Istria between Višnjan and Poreč, only 5km away from the coast. The karst region, where it was created, is a sea sediment covered by red soil (terra rossa). From the vertical entrance into the cave situated at 117m above the sea level there is a beatiful sight over olive and grape vine plantations all the way to the sea.

An interesting detail of this adventureous trip is also the encounter with the underground world of animals: visitors will see the cave olm (Proteus anguinus Laurenti), endemic in this dinaric karst region- an animal that can be found only in this karst area.

Villa Dracena is a new stone house with swimming pool and a big green surface around. Terrace with outdoor equipment to enjoy great holidays.